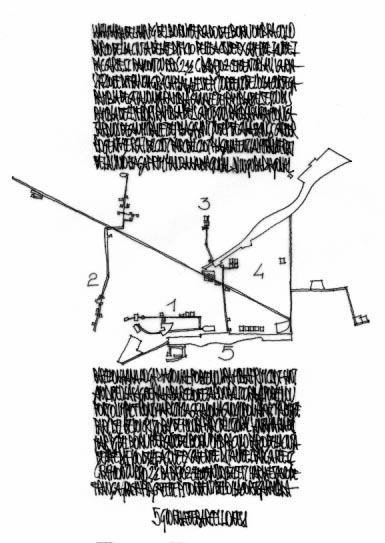 INSTRUCTIONS FOR READING
This work is divided into two parts. The first one included: a) a syntetic analysis made on six maps of Barcelona; b) the town told while walking, during five days, among architectures and collectives places. The second part is dedicated to the sixth day, that is to say to the excursus on the day of rest: only general considerations on the contemporary meaning of collective space.
Five Days in Barcelona + One is basically a guide to Barcelona town (BCN). It is a guide, if reading is only limited to the first part, which passes thrugh both well known places of the town and zones not visited by the common man. It’s a walk thrugh areas of the town which are definitely peripheral and where a tourist very unlikely ventures: places rich in history and precious indications for those who are intersested in the destiny of european town planning, particulary with reference to outskirts and their needs.
We must give the word Peripheral both the meaning of a place topologically on the outskirts of the town and that of internal border: where two planes of urban fault meet with their meights of unsolved differences.
I took five excursions on foot or by public means of transport, times have been variable according to the personal necessities or reflection. It is clear, as pointed out in the second part, that the town of BCN is used as a stone Bible for an instrumental reading of what public space has been and what it may be, in the construction and reconstruction of a contemporary town. Our interest is centred on the Polycentric Public Space; during five days, we meet artefacts and places of different architectonic urbanistic value, spaces of public or private life characterized by their form linear but always polycentric. The question can be also put in terms of Street adversus Square: as a retorical exercise but basicaly as a topic of architecture. Linear Collective Space, whose name is certainly Street, but with some complications, where policentricity is the specific measuring the distance with the opposite monocentricity.
During five different days, while crossing internal and external borders you can meet single or composite episodes sediments or pieces of town wich in their uniqueness or choralism we can define Linear Spaces (LS) simple or complex. Among the elements of Past Ramblas are the auroral moment, we might say the genetic key, to open to the interpretations of collective places in the town of BCN.
As pointed out in the second day and later in the conclusions (Excursus on the day of rest) Ramblas, in their evolutive complexity and in their spatial simplicity concur to the definition of the notion of LS, that is a place where, on the plan, a dimension prevails on the other remarkably, and that’s what occurs in a boundless way in the case of Ramblas.
The scond part is the moment of general considerations for a more exact definition of LS.
We can say that BCN has been chosen as the object of research aving to the presence of a remarkable quality of urbanistic architectonic events diffused in a balanced way, but also owing to the lack of great single episodes: more for its diffused quality and method of the town recoustruction than for the presence of great architetures which, on the other hand, are lacking.
In the five days, you’ll meet well known places like the Olimpic Port, but also minor events like the paving of Carrer Rogent. Proceedings rather definable of urban restoration, that is of recostruction of tissues where weft and warp are worn out by time or have never existed.
A paradigmatic example is the town of Cerdá. As we’ll explain later, this has got the intrinsic peculiarity of abstraction: a prototype and as such usable for continuous reinventions. Discovering new relations inside already known routes in one of the possibilities given to the town planning: what today is a callidum verbum may acquire a new meaning by carrying out simple devices which can result in a renewed vitality to places (pavings, new plantings, insertion of monuments). The Cerdá planning has at its origins, among the various features, the merit of having built relations between existing pieces (the Historic Town, Gracia, San Martí) a unity by parts according to a method which in the freedom of action allows a continuous reinvention of the method itself. As you can see in the days (particularly the first, the third and the fourth) there are parts of the Ensanche mostly finished and others still to be built; these last ones are available for morphologic feratures simple to be reshaped.
00-indice.pdf
01a-introduzione.pdf
01b-introduzione.pdf
02-prima-giornata.pdf
03-seconda-giornata.pdf
04-terza-giornata.pdf
05-quarta-giornata.pdf
06-quinta-giornata.pdf
07-sesta-giornata.pdf
08-bibliografia.pdf